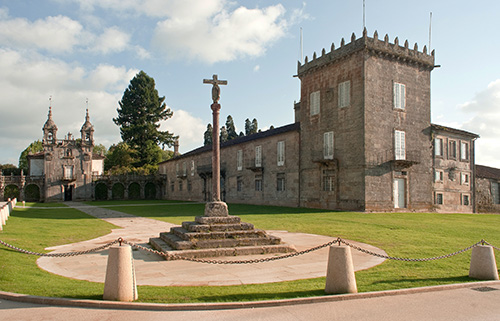 Part of an original defensive type building, built by D. Suero de Oca at the end of the 15th century. In the 18th century, this building became a baroque-style agricultural and residential complex. Inside it houses the oldest Baroque garden in Galicia, terraced and dominated by water.

Declared an artistic historical monument. Within the complex, three main elements must be distinguished: church-chapel, palace and gardens. The church-chapel is located in front of the square forming a square with the Pazo and connected to it by a gallery. The current Pazo has an old part formed by two orthogonal wings and a battlemented tower with a square floor plan. In the 19th century, the gallery, the main staircase, the stone bench and the staircase under the portal of the main entrance were built. The gardens can be visited and there are two types. The horticultural one, with squares dedicated to different crops, which is crossed diagonally by the set of laundry, estuary and mill, bordered in turn, the latter, by a breed of boxwood, of remarkable age, and citrus fruit fields. The geometric garden, for its part, is made up of seven stands of outstanding flora: the reticulated camellia is the most prominent tree, followed by other important specimens such as cryptomeria, yew, evergreen magnolias, lagerstroemias, red sequoia, white prairie, laurocerasus and a large mass of camellias that adorn the walks. The Carreira do Conde, with its tree-lined promenade, is bordered by the other part of the English-style garden, where a wooded meadow and an ornamental forest coexist, in which a fotinia and a Virginia tulip stand out, as well as the avenue of the lime trees.

A manor house that, due to its baroque style, could not be more Galician, nor more beautiful. The spouts of a thousand fountains recall the dull sound of the pylon jet in the villages and the slow slide of the ducks in a pond that is, in fact, a pure dream, the palatial elegance of silk. And a garden, which in the uncertain light of winter, combines all the nuances of a poem.