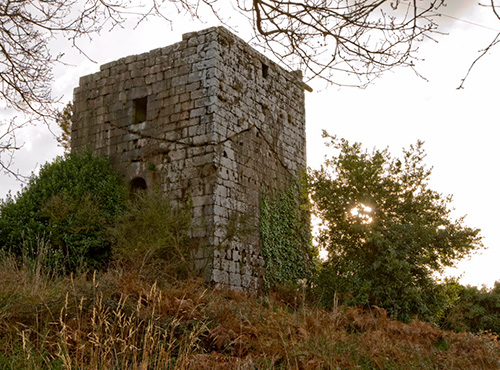 It is a tower of the s. XIII, with a square floor plan that constitutes the last remains of a medieval castle destroyed by the irmandiños attacks in the s. XV, like most medieval castles in Galicia.

The Guimarei Tower is considered to be the most representative tower-palace complex in A Estrada.

Its height is around 15 m and its walls are thick. It has loopholes on both sides and at the top of each corner the figure of a protruding stone cannon, like a gargoyle. Built with good ashlars that form wide walls, typical of a medieval defensive construction.

Next to the Torre de Guimarei are the remains of the Pazo de Guimarei built in the 17th century, and its first inhabitant was Señor do Villar de Payo Muñíz, Antonio de Mosquera Nóvoa (1589), son of Alonso Vázquez Valcárcel and Lady of the Farm of Nogueroa, Luisa de Novoa Ulloa.

The dimensions of the manor reach 34 m in length, in which the interior rooms such as the kitchen, rooms and other spaces are still preserved.

In the main door of the pazo there is a shield where two inscriptions can be seen that say “Villar” and under the circular pediment a well-carved shield with the arms of the Villar, Samiento, Mosquera and Aranda.

This shield is related to Luis Francisco Mosquera, Villar y Aranda, third Marquis of Aranda de Quintanilla and third of Guimarey, Knight of the Royal and Distinguished Order of Carlos III and member of the Royal and Supreme Council of the Indies (18th century).